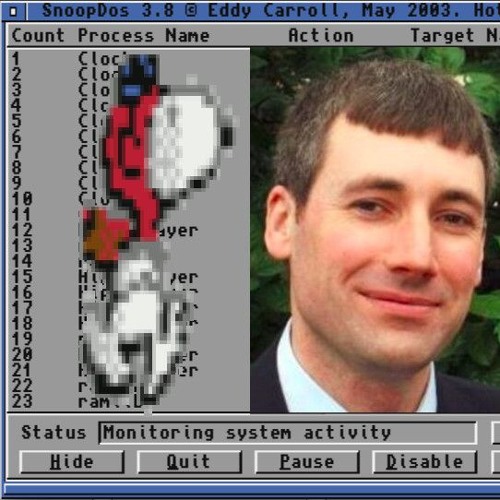 Eddy Carroll is the Irish author of the legendary SnoopDOS application for Amiga. From the Commodore PET to Amiga and beyond, Eddy’s experiences and contributions had a profound effect on the scene. SnoopDOS in particular spread like wildfire around the globe and is still a staple of many Amiga users today.

Music by Radix licensed under the Mod Archive Distribution license.

<http://www.visual6502.org/>
The realtime 6502 simulation on the transistor level. Lovely graphics too.

<http://www.pagetable.com/?p=894>
Blog post from a couple of days ago on PageTable explaining how to build the ORIGINAL C64 kernel source code on a PET (or more likely, a PET emulator) – plus of course, a link to that source code, rescued from an old 5.25″ floppy preserved by Dennis Jarvis of CBM. Lots of good links to other annotated C64 source code references there as well.

<http://www.iol.ie/~ecarroll/1275baud.html>
Article about supporting a cheap Prestel 1200/75 modem on an Amiga that can only do 1200 baud, using some clever bit magic. It’s archaic now, but in fact I ended up using some of the techniques here in my later router work 10 years later (and in fact used a similar technique to help debug a baudrate mismatch issue only two weeks ago on my current project!)

Some of Eddy’s Amiga utilities, with source:

<http://www.iol.ie/~ecarroll/software.html>
(IOL was Ireland Online, which was bought by Indigo and then O2 and now it’s owned by BT I believe. Anyway, they have a silly default robots.txt that prevents the site being indexed, so Google can’t see any of this any more. Moving it to a new site is on my to-do list.)

A couple of people have uploaded videos of my ancient C64 tribute to the original Amiga ball demo, e.g. <https://www.youtube.com/watch?v=e4QBQPkMoF0> — but none of them hit CTRL-C to invoke the hidden Guru Meditation error 🙂

Some of Eddy’s past articles are archived here <http://iol.ie/~ecarroll/a4000.html>.